In the spirit of celebrating remarkable creative genius which is the quintessence of great advertising, we will be featuring the most iconic and memorable advertisements of our time. Think an ad should be on this list? Drop us a note at hello@independents.ai

Here’s to the crazy ones, the misfits, the rebels, the troublemakers, the round pegs in the square holes..

The ones who see things differently – they’re not fond of rules and they have no respect for the status quo..

You can quote them, disagree with them, glorify or vilify them but the only thing you can’t do is ignore them because they change things..

They push the human race forward, and while some may see them as the crazy ones, we see genius because the people who are crazy enough to think they can change the world, are the ones who do.

The Team behind this great Ad:

Rob Siltanen, Managing Partner & Creative Director – who penned the first draft of the script that accompanies the Ad

Ken Segall, who reworked the script to further amplify its impact.

Many others – who supported the team in adapting the campaign for TV, print and billboards.

How the campaign transpired:

Here’s a little background on how this campaign transpired and the inspiration behind it, as adapted from Rob Siltanen’s original commentary in Forbes, “The Real Story behind Apple’s Think Different Campaign” here:

During the internal brainstorming and presentation of concepts and ideas to pitch for the Apple Campaign, one stood out in the sea of presentations pinned up on the wallboards.

The rainbow-colored logo served as stark contrast to the black and white photography, and, to me, it seemed to make the “Think Different” statement all the more bold. It was the exact kind of attention-getting and thought-provoking advertising Apple desperately needed. Clow loved the idea as well, and we directed everyone in the room to start blowing it out in TV and other media.

The creator of the work was a brilliant art director named Craig Tanimoto. Craig had worked with me for many years (mainly on the Nissan business), and he virtually always had a unique way of looking at things..

I asked Craig what it all meant, and he said, “IBM has a campaign out that says “Think IBM” (it was a campaign for their ThinkPad), and I feel Apple is very different from IBM, so I felt “Think Different” was interesting. I then thought it would be cool to attach those words to some of the world’s most different-thinking people.” 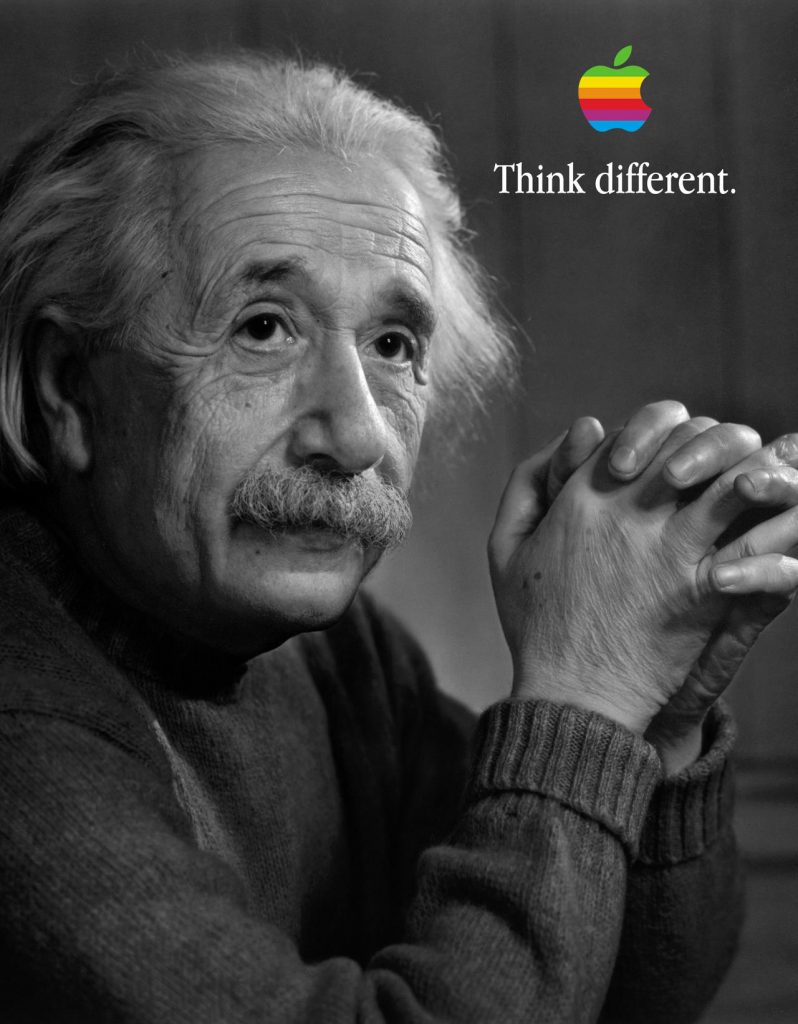 The inspiration behind the words – in Rob Siltanen’s words:

“Below are some key passages from “Dead Poets” that resonated with me and ultimately served as inspiration for the Apple script. 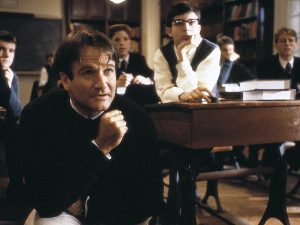 “Despite what anyone might tell you, words and ideas can change the world.”

I had two sections that I loved.

The opening, which I had written to feel like a titled poem …“To the crazy ones. Here’s to the misfits. The rebels. The troublemakers. The people who see the world differently.”

I felt the opening was powerful because I designed it to sync up with the images of the geniuses and have a certain shock value. I thought about the brilliant people throughout history and the struggles they went through. Many lived tortured existences, and it was becoming clear to me that they shared a common thread. Like Apple, they all had amazing visions, but also like Apple, all of them at one point or another were given unflattering labels.

Martin Luther King was seen as a troublemaker before he was universally seen as a saint, the rebellious Ted Turner was laughed out of town when he first tried to sell the concept of a 24-hour news channel, and it’s been said that before Einstein was celebrated as the world’s greatest thinker, he was thought to be just a guy with crazy ideas.

Of course in 1997, Apple was being called a “toy” that was only for “creative types,” and it was being chastised for not having the same operating system as everyone else. But I felt this copy would speak to the fans and get people who weren’t on our side to re-evaluate their thinking and realize that being different is a good thing.

Ralph Waldo Emerson once said, “To be great is to be misunderstood,” and I always believed that was the general concept behind the “Think Different” campaign.”

If there’s any ad we can watch on repeat indefinitely, it would be this.

“Think Different” celebrates a bold way of living that inspires us to think (and therefore be) different and subtly aligns the Apple brand with the some of the boldest changemakers there ever lived. By honouring 17 of the some of the most transformative influencers and bold trailblazers who have defined our 20th century and beyond namely: Albert Einstein, Bob Dylan, Dr. Martin Luther King, Richard Branson, John Lennon (with Yoko Ono), Buckminster Fuller, Thomas Edison, Muhammad Ali, Ted Turner, Maria Callas, Mahatma Gandhi, Amelia Earhart, Alfred Hitchcock, Martha Graham, Jim Henson (with Kermit the Frog), Frank Lloyd Wright and Pablo Picasso, Apple was able to enforce on the statement that it is identity as the trailblazing round peg in a sea of square holes, out to stand out and change the world.

Great marketing elevates the brand to a greater ideal thereby connecting the brand to a reason for being (raison d’etre) than just its products and services, to a way of life. We think the ad did just that – and raised the standards of good advertising that much higher.